As coordinator of the EU Horizon 2020 project, StepUP, IES are helping to develop affordable solutions aimed at transforming the energy renovation market and making the decarbonisation of existing buildings a reliable, attractive and sustainable investment. To support these objectives, IES have been applying their ICL Digital Twins technology on two pilot sites in Hungary and Spain.

The project showcases how calibrated digital twins, which integrate real data within a 3D model to create a highly accurate virtual representation of the operational building, provide an incredibly valuable tool which can support data informed decision making in building design and retrofit projects.

Read on to find out more about how these digital twins are adding value to the decision-making process for renovation and retrofits in StepUP’s two pilot sites. 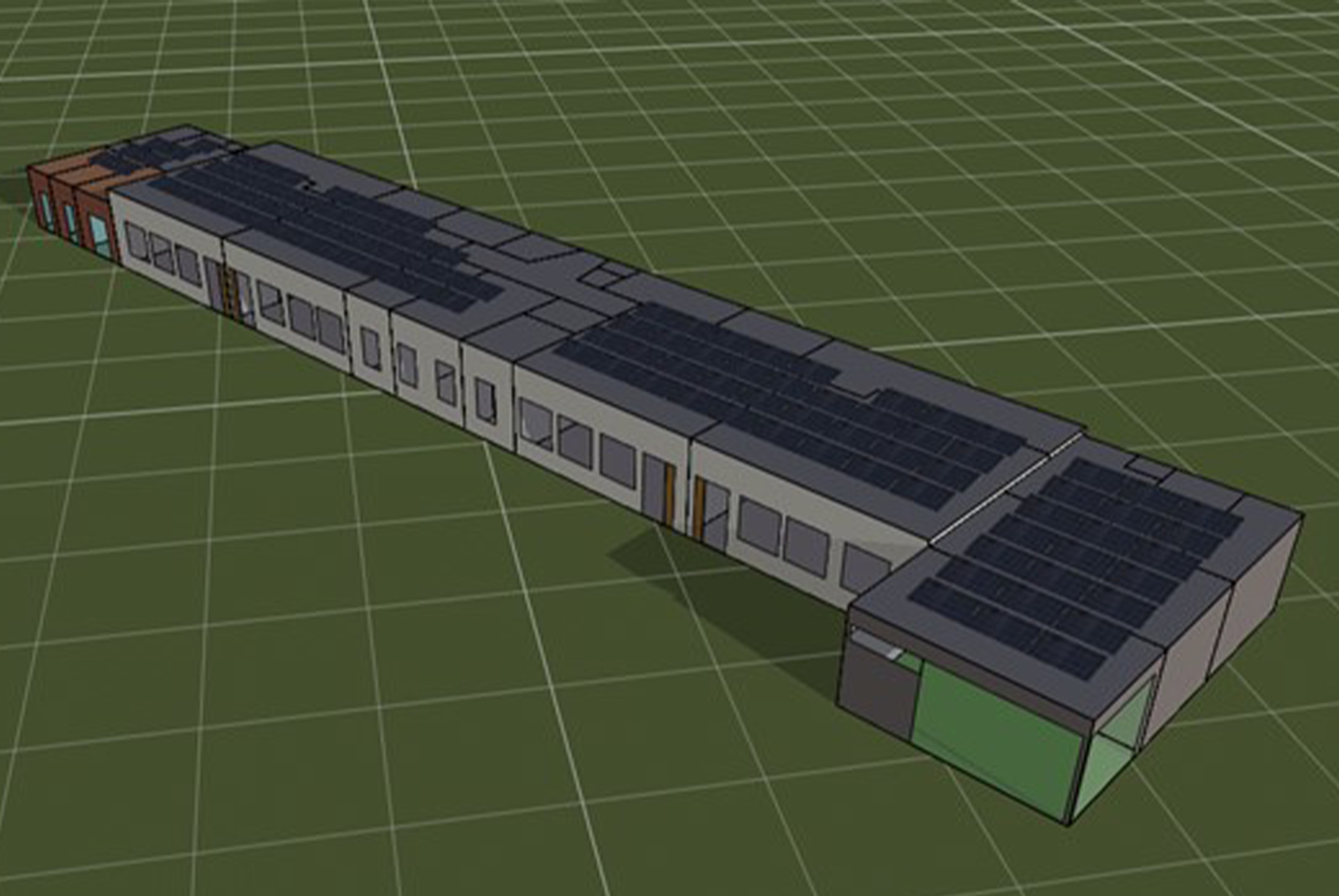 The first of the pilot sites is the Zöld-Liget Kindergarten in Hungary. Built in the 1950s in Budapest’s suburban area, the current energy performance of the building is poor due to significant heat loss through the roof and walls and the old and inefficient gas boilers that provide the heating.

To enable the creation of a calibrated digital twin for the site, hourly data was obtained from the utility company and imported into IES’ iSCAN platform for monitoring and analysis. Part of the ICL digital twin suite, iSCAN allows users to centralise any time-series data from different building and energy management systems, utility portals, IoT sensors and historic files in one platform, providing a single pane view from which to gain insights around current building or portfolio operation and uncover where improvements and savings can be made.

The main issue the project team faced in terms of calibrating the model was a lack of a clear pattern in the building’s heating energy usage within the gas data.

Two metrics that are commonly used to evaluate the level of calibration achieved in building energy simulation models are NMBE (Normalized Mean Bias Error) and CVRMSE (Coefficient of Variation of the Root Mean Square Error). In this case, the NMBE, which indicates the total difference between the model’s predicted energy use and the building’s actual metered energy use, achieved a close calibration. However, the CVRMSE (which indicates how accurately the patterns of energy use are predicted within specified time steps) was harder to calibrate, due to the lack of regularity in the actual consumption patterns.

Analysis of the data showed that the heating was turned on during the night and sometimes off during the day, while heating use was also observed on the weekends with no clear pattern – most likely due to a fault in the heating system which was causing it to switch on and off automatically at these times. Despite the challenges caused by these unexpected use patterns, the calibrated digital twins was able to closely match the average daily profile for the building’s heating consumption, to provide the baseline for further analyses and testing of retrofit options.

The calibrated model was used to estimate the space heating load and compare the baseline results from the building’s original envelope against the project’s proposed plug and play envelope system.

The total space heating load was estimated for a typical weather year and compared with a model with various deep renovation and shallow retrofit measures implemented. This also included modelling a thermal storage tank using co-simulation, a method which enables a user to interact with the model at every time step and read/write variables directly to the model to change its behaviour. This enabled the team to model a complex system that stores energy based on the time of day and tank temperatures, achieving load shifting to avoid peaks during the day when energy is usually more expensive.

Data related to indoor environmental quality (IEQ) was also collected prior to analysing the thermal comfort and ventilation in the classrooms. The actual CO2 concentrations were way above ideal levels (>800 ppm) – rising to 3000 ppm at times, therefore the digital twin was also used to simulate the impact of installing an MVHR (Mechanical Ventilation with Heat Recovery) system as part of the proposed renovation – a system that provides fresh filtered air into a building whilst retaining most of the energy that has already been used for heating. Predicted Mean Votes (PMV) – a metric used to indicate thermal comfort within buildings – were extrapolated from the simulated data to ensure that the renovated design would not have a negative impact upon occupant comfort.

The retrofitted model showed a potential saving of up to 65% in terms of CO2e.

Using the calibrated digital twin, the team were able to identify potentially significant areas of energy wastage in terms of heating use, due to the control issues, and can now advise on how to improve this.

The analysis also highlighted that the kindergarten was being maintained at very high temperatures, reaching up to 27 degrees sometimes. By implementing the suggested retrofits, the simulations indicated that temperatures may reach a maximum of 22 degrees in the building. While these temperatures will be more than comfortable for occupants, an awareness campaign has been recommended, to help teachers and pupils adjust to the lower temperatures. The calibrated model confirmed that the new design has good potential for the PMV to be in comfortable ranges, demonstrating that improving the ventilation would not compromise occupant comfort. 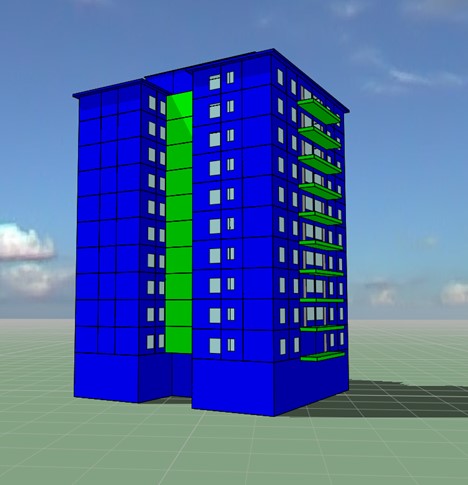 The second pilot site is a multi-family residential dwelling located in Pamplona, Spain. The building, which comprises 40 apartments and commercial space on the ground floor, was built in the 1970s – before the implementation of energy efficiency regulations – and occupants were experiencing issues with thermal discomfort, low airtightness values and high energy consumption. The StepUP project therefore aims to help owners at the site to increase the overall thermal insulation of the building and improve the energy rating from E to B or C post-renovation.

The main challenge in achieving the calibration for this site, was the limited availability of historical energy data. To improve the calibration and accuracy of the digital twin, energy meters were installed to provide access to reliable granular data which could be fed directly into the digital twin via IES’ iSCAN platform. This data was supplemented by pre-defined apartment templates and construction information, which when compared against the real data collected in iSCAN, were found to match the actual building loads very closely, creating an accurate baseline from which to test the various proposed renovation and retrofit measures.

Mainly composed of an improved building envelope, the planned improvements for this site consist of upgrading the envelope with StepUP’s new Plug & Play façade, upgrading all windows to modern double glazing, and making improvements to the roof.  Analysis in the calibrated digital twin determined that these upgrades could lead to up to a 45% reduction in the infiltration rate and a significant reduction to the U-value of the entire envelope.

In addition to the envelope upgrades, the study also considered retrofitting the HVAC system with a combination Air Source Heat Pumps (ASHPs) connected to a thermal storage tank. The tank acts as a demand shifter, storing heat produced by the ASHPs during periods where demand is minimal and releasing it back into the hot water loop system when demand is appropriate.

By applying all of the envelope and HVAC retrofits together, the digital twin demonstrated that a significant sensible heating load reduction of up to 65% could be achieved, representing a vast improvement on the existing building. The digital twin also helped to give visibility to significant – yet avoidable – heat losses which were occurring throughout the system, as a result of issues such as uninsulated piping, which could be targeted as part of the retrofit programme.

The total oil consumption for the entire system also saw a significant potential decrease when all of the retrofit options (both envelope and HVAC retrofits) were applied in combination within the model, reducing from 460MWh to 80MWh annually – representing up to approx. 80% oil savings. A large proportion of the total demand was transferred to electricity, increasing the potential for the building’s energy needs to be met by clean and renewable energy sources.

Crucially, the pilot demonstrates how the proper installation and operation of any retrofit measures will have a marked impact on the overall building performance, and this will be key to ensuring that any savings are maximised once any deep renovation or shallow retrofit measures have been deployed. The digital twin can play a key role in enabling the performance of the building to be monitored and continuously optimised, even after the improvements have been implemented.

Due to the existing building’s age and lack of extensive retrofit up until now, the results are encouraging and can help reassure the owners that the proposed approach and planned retrofit measures will help address the biggest savings potential first. Significantly, the simulated results also showed that occupants’ thermal comfort would be improved by the planned retrofit measures, providing a well-balanced solution to overall building performance.

Both of these projects are testament to the value of calibrated digital twins in supporting the decision-making process surrounding building renovation and retrofits. By providing a highly accurate virtual environment, which responds and behaves like the real-world building, these models – underpinned by the power of physics-based simulations and real data – can deliver the data-driven information needed to uncover significant energy, carbon, capital and operational savings, to de-risk retrofit investments. All in all, this approach can make the decarbonisation of existing buildings a much more reliable, attractive and sustainable investment – which is exactly what the StepUP project aims to do.

This project has received funding from the European Union’s Horizon 2020 research and innovation programme under grant agreement no. 847053.

This website reflects only the author’s views. The European Climate, Infrastructure and Environment Executive Agency is not responsible for any use that may be made of the information it contains.